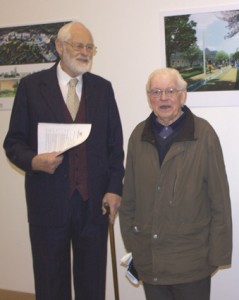 Fr. Piaras with Dr. Ivor Browne at the opening of the Phoenix Care Centre in 2013

The Grangegorman Development Agency would like to acknowledge the passing of Fr. Piaras Ó’ Dúill OFM Cap. on Tuesday 5th September 2017 and to extend our deepest sympathies to his family, friends and former colleagues in St. Brendan’s Hospital (now the Phoenix Care Centre).

Fr. Piaras was chaplain of St. Brendan’s Hospital for over 40 years and, along with former staff members Dick Bennett and others, was responsible for the salvaging of many of the old hospital files and artefacts in the Grangegorman Hospital museum. The records, which stretch back to the opening of the hospital in 1814, are now in the care of the National Archives and the other historic artefacts are in storage in Grangegorman.  They will eventually be displayed in a new museum space onsite as per Fr. Piaras’ wishes.

Fr. Piaras was born in Kilmainham in 1931 and trained with the Capuchin Order in Ards Friary in north Donegal. He began working in St. Brendan’s in the 1960’s. He was an avid Irish speaker and was a teacher of the language for a time.

Fr. Piaras was actively involved in the Grangegorman project from the very beginning, taking part in all aspects of the initial consultation meetings. He was a regular visitor to the GDA offices where he would look for updates on the project and remind the team about the museum and the importance of it in the long term plans for the site.

As the chaplain for the hospital, Fr. Piaras looked after St. Laurence’s church. He was always keen to see new activities taking place on the site and happily facilitated a production of The Crucible for the DIT graduate show in 2010.