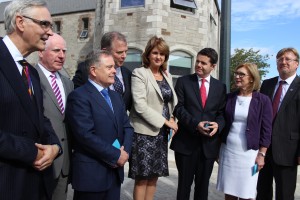 The Tánaiste, Ms. Joan Burton TD, along with the Minister for Education and Skills Ms. Jan O’ Sullivan TD, the Minister for Public Expenditure and Reform, Mr. Brendan Howlin TD, and the Minister for Transport, Sport and Tourism Mr. Paschal Donohoe TD all paid a visit to Grangegorman today to see the new Campus.

Local TD Joe Costello joined the group as they took a tour around the first phase of the development which recently opened its gates and where first year students will come to tomorrow.

According to Tánaiste and Minister for Social Protection Joan Burton, “The development of Grangegorman is very close to my heart.  I grew up just a stone’s throw from the site and have had a long association with the tremendous work done by Dublin Institute of Technology.  Seeing the progress achieved to date is inspiring.  We are seeing the evolution of a state-of-the-art educational facility that will have strong links with the local community.  Meeting the first staff and students who will work on the campus gives a very real sense of the achievement that has been made to date and the potential that will be realised in the future.”

Speaking during the visit Minister O’Sullivan stated, “Grangegorman is being transformed into a world class educational campus close to the thriving heart of Dublin and this Government is proud to have supported this vision.  This week more than 100 staff and 1,000 students will begin work on the campus and we expect that to grow to 10,000 students by the beginning of the 2017 academic year.

“The initial phase of development has focused on the remarkable conservation and development of the 19th century buildings that formed the core of the old Grangegorman site.  They have been brought back to life as state-of-the-art design studios, lecture rooms, a library and student facilities.   I look forward to continued progress on this unique educational facility that has achieved so much already.”

Minister for Public Expenditure and Reform, Brendan Howlin, TD, said, “Grangegorman is one of the most important pieces of public infrastructure underway in the country and it is one that I am proud to support.

“The project has been made possible by an innovative approach to funding that has seen direct Government spending and use of the public private partnership model.  This innovation is paying dividends for DIT and the wider community.

“I am particularly pleased that this major capital project is piloting initiatives that give priority to local employment and training opportunities for apprentices, an issue that both Minister O’Sullivan and myself have a very strong commitment to.

“This will be a wonderful facility for staff and students of DIT.  The transformed Grangegorman campus will also make an incredible contribution to the local community.  New health facilities are already up and running and the coming years will see Grangegorman host a new Educate Together primary school and a Primary Care Centre.”

Minister for Transport, Tourism and Sport, Pascal Donohue paid tribute to the President of DIT, Professor Brian Norton and his staff, the Grangegorman Development Agency, led by Michael Hand, and the local community for their dedication to the project.  “This project will have a tremendous benefit for the local community.  Not only will the campus produce a new generation of graduates who will contribute to Ireland socially and economically, it will also reach out into the community in a unique way for a third level institution in Dublin.  It’s an exciting time for DIT and I look forward to working closely with them and other partners into the future.”