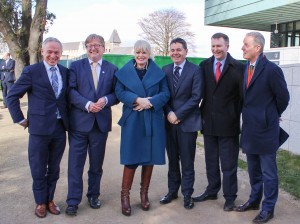 Large-scale construction is about to start again in Grangegorman with today’s announcement by the Minister for Education and Skills Richard Bruton TD, the Minister for Finance & Public Expenditure and Reform Paschal Donohoe TD and the Minister of State for Higher Education Mary Mitchell O’ Connor that the PPP agreement has been signed for the building work on the new Central and East Quads.

These two state of the art new buildings, once complete, will provide a new home to over 10,000 DIT students and staff. This is over half of the overall number of students studying in DIT.

Welcoming the signing, the Minister for Education and Skills, Richard Bruton, said,“Today’s signing represents a very significant step forward in realising the Government’s ambitions for the Grangegorman development and in delivering a consolidated, state of the art campus for DIT. This significant investment in higher education infrastructure will also advance Ireland’s ambitions to provide the best education and training service in Europe by 2026.

“The Eriugena consortium brings considerable expertise to this ambitious project.  The PPP model harnesses the best of the private and public sectors.

Many people have worked hard to make today’s agreement a reality. I would like, in particular, to thank the NDFA, which has procured the project on behalf of the Department of Education and Skills, working in conjunction with staff of my Department, DIT and the Grangegorman Development Agency.  The NDFA will also monitor the delivery phase.  I would also like to express my appreciation for the significant ongoing work of the Grangegorman Development Agency and its Board in realising the transformative potential of the Grangegorman development.”

Minister for Finance and Public Expenditure and Reform, Paschal Donohoe, said “The very positive impact the Grangegorman development is having on the surrounding areas of inner city Dublin is already very evident. Today’s announcement represents a significant step forward in realising the full potential of the Grangegorman site as a hub for high quality education and health facilities, as well as for community activity.

The realisation of this development on a previously underutilised brownfield site in the heart of Dublin is very much aligned with the ambitions of the National Planning Framework and National Development Plan to deliver a more compact urban growth.

I would particularly like to acknowledge the collaboration of the project funders.  This represents the latest in a series of major and very welcome investments by the EIB in the education sector in Ireland.  This includes close to €700 million in loans directly to the university sector across the last decade, as well as investments of nearly €500 million in school building programmes.  The Grangegorman project will be the fourth PPP in the education sector to benefit from EIB support.”

Minister of State for Higher Education, Mary Mitchell O’Connor, underlined the significance of today’s announcement in the context of DIT’s plans to become a Technological University, together with IT Tallaght and IT Blanchardstown.  The Minister said “The Technological Universities Act, which has been a significant priority for this Government, was passed into law on 19 March. This is a major milestone and implementation of a significant commitment in the Programme for Government. It gives a renewed impetus and welcome certainty to the consortia planning to seek TU status. It will underpin the development of a new type of higher education institution.

Technological Universities will have a transformational impact on the higher education sector. DIT, IT Tallaght and IT Blanchardstown have been working together over many years with a view to realising the vision of a new multi-campus Technological University for Dublin. Their plans are very well advanced and I understand the consortium aims to submit its application within a matter of weeks.”

Speaking about the beginning of this important project, Chief Executive Officer of the Grangegorman Development Agency said “I am delighted to see this massive project get underway. It has come about through a lot of hard work from our colleagues in the Department of Education and Skills, the National Development Finance Agency (NDFA), and DIT as well as significant support from the European Investment Bank. We are really looking forward to working with everyone involved to ensure the buildings are complete and ready for DIT on schedule.”

Welcoming the announcement by Minister Bruton, the President of DIT, Professor Brian Norton said DIT has been working towards this next stage of the Grangegorman development for quite some time.  “Today’s announcement is of great significance for current and future DIT students, ensuring they can look forward to the best possible educational experience. The development of the Grangegorman campus has the power to add new life and opportunity – culturally and economically – in the heart of Dublin City. The commitment of colleagues in the Department of Education and Skills and the NDFA, combined with the support of Minister Paschal Donohoe and the European Investment Bank, have now enabled the plans for the campus to be realised and we look forward to working with the consortium to ensure the best possible result for DIT and for the city.”

Professor Norton said the development will lead to the consolidation of DIT in Grangegorman within the next four years and, building on existing links in the City, will play a significant role in the creation of Ireland’s first Technological University with partners IT Blanchardstown and IT Tallaght.  Thanking colleagues in DIT and in the Grangegorman Development Agency (GDA), he said “We can now prepare in earnest for this next phase, with our students and colleagues in Sciences and Health, Electrical and Electronic Engineering, and Arts and Tourism getting ready to move to Grangegorman in time for September 2020.”

Welcoming the signing of the Project Agreement, Andrew McDowell, European Investment Bank (EIB) Vice President, said “The European Investment Bank is pleased to provide circa EUR 110 million to support development of the DIT Grangegorman campus and its transformation into a centre of world class education. Future generations of students will benefit from 21st century innovation and education at one of the largest ever regeneration projects in Dublin. The EIB is pleased to build on our track record of supporting investment at higher education institutions across Ireland.”

Gerard Cahillane, Deputy Director of the NDFA said: “We welcome financial close and congratulate the Eriugena consortium. As the procuring authority for this project, the NDFA is delighted to be involved in a flagship project that is central to the development of the new DIT campus at Grangegorman, and which will bring lasting benefits to the Institute’s students and staff.”

The Central Quad will accommodate academic activities and facilities required for a total of ten schools from the College of Sciences & Health, College of Engineering & Built Environment and the College of Arts & Tourism.

The East Quad will accommodate the majority of academic activities and facilities required for the College of Arts & Tourism which currently consists of six schools, four of which will be accommodated within the East Quad building.

Both of these new buildings are set for completion and occupation in September 2020. They will add to the changing landscape of the new Grangegorman quarter, which already includes the Phoenix Care Centre, the Grangegorman Primary Care Centre (opened this year), the Greenway Hub, the new playing pitches, playground and walking/jogging track.

With work now beginning on the Central and East Quads the GDA will aim to keep the project progressing with the design of the new Academic Hub and the HSE Residential Care Neighbourhood, and the submission of the planning application for the new Dublin 7 Educate Together School on the site.