We met with @GansonLtd this week to welcome @Education_Ire, D7 Educate Together and the design team to mark the topping out of the teaching block on the new school. Construction is on track for completion in spring next year. ggda.ie/construction-t… pic.twitter.com/af6VioMinh

@srpski_dubliner Hi Ljubisa, the school is currently on programme for completion in February 2023.

Fantastic to meet the D7 Educate Together Junior Infants in their class bubble today as they came to take a look at the construction of their new school. They had lots of questions! pic.twitter.com/BRgCgtZHU5

Happy new year from the GDA Team! We're excited about what's to come for the Grangegorman Project in 2022. Meanwhile, if you missed our winter newsletter, check it out here ggda.ie/latest-newslet… pic.twitter.com/f5IQ6v2ShY

Keeping On The Grass at TU Dublin’s Central Quad 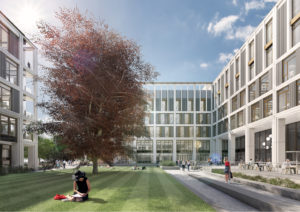 As work continues on site to finish out the building’s interior, we take time out to listen to Simon Carter, a partner with Feilden Clegg Bradley Studios (FCB Studios) and the project’s lead designer. Simon has been designing innovative higher-education buildings for twenty years, and six years ago set out on the Central Quad’s design journey.

We teleconference, and the conversation bobs easily between our computer screens across the Irish Sea. Simon is in central London, 600km south-east of us in Grangegorman. It’s late-evening and our conversation is a break from what he describes as the business-end of the project, battling with the remaining few design decisions. While the end line is well within sight, this stage tests everyone’s stamina; to keep the final touches between the ditches.

Our initial small talk is dominated by his selection of the last remaining light fittings, and their particular finish. Later, Simon makes the point that these seemingly insignificant colour choices are often more challenging than the earlier, bigger design decisions — the difference being the rapidly evaporating time between now and opening day. The convivial chitchat gives way to our agenda; a rewind into the interior world of the project. He exhales thoughtfully, ready to reflect on the previous half-decade — pre-pandemic, pre-Brexit, and even pre-TU Dublin — to the beginning, and to those crucial first design moves.

The Central Quad is colossal by any measure — a fifth larger than IKEA in Ballymun — the largest building at Grangegorman so far. It will welcome students and staff from TU Dublin’s schools and colleges across the sciences, technology, engineering, culinary arts and hospitality. TU Dublin’s Central and East quads are being delivered under a single ‘Public Private Partnership’ contract. This means that a bespoke private sector consortium (Eriugena) has undertaken to design, build and finance the construction of the two buildings. Eriugena will maintain the pair of buildings for twenty five years. Simon and his team, along with the rest of the design team, are employed by Eriugena to design the Central Quad.

A Separate team of designers led by AHR (an architectural and building consultancy) are carrying out the same role at the TU Dublin’s East Quad.

Technically this is FCB Studios’ first experience of a state-led Public Private Partnership. Simon is quick to point out that whatever the procurement system, it is the manner in which people work together that really make projects — and good relationships make good projects.

The breadth of the these relationships is noticeable in his whistle-stop name-checking which spans quickly from the client-side team of the National Development Finance Agency, TU Dublin, the Grangegorman Development Agency and their technical advisors, to the building contractors, sub-contractors and their suppliers.

Closer to home he cites consistency as key to ensuring best outcomes for big jobs; he and Galway-born project architect Aoife Keigher have worked alongside each other for five years on the Central Quad.

Simon recalls the early phase of brief development through a process of ‘Competitive Dialogue’. During this tendering phase, three shortlisted consortia compete in what amounts to a twelve week interview with client representatives.

During the competitive dialogue each consortium presented proposals, to which the client group reacted and, in turn, the consortia tweaked their designs before re-presenting. Simon remembers this as an intense but rich experience, sensing in retrospect that his team was rewarded for demonstrating their ability to listen. This allowed them to produce design proposals that aligned closely with client objectives. Ultimately Eriugena emerged as winners of this process.

Simon commends the client-focus on quality, and the detailed client feedback throughout the dialogue. He credits this process as capturing a certain standard that continues to help defend some final decisions today. The design team then moved to the next stages of design development. This culminated in a set of documents defining in fine detail the project’s design.

Remembering those early design moves, Simon describes the challenge of responding to a brief within a brief. It was a requirement that the building design conform to predetermined organising principles established by the Grangegorman Masterplan. This included setting out the limits of an invisible development ‘envelope’ — prescribing maximum dimensions of width, breadth and height. Within the development plot, the brief for the building set out aspirations for openness and transparency against the backdrop of the not-insignificant task of addressing the needs of several schools and colleges, coming from separate buildings across town to a single building where new forms of blended learning and shared working spaces were to be harmonised.

Simon describes two core ideas that formed very early to balance all of these demands. The first was to push the building right to the outer edges of the plot with two hefty L-shaped blocks or arms — but taking care to step back from existing mature trees. He speaks respectfully of theses elders; the solemn holm oaks to the north-west and the majestic copper beach deep within the plot and the memory of a cherry tree to the south-west. Between its two arms, one major and one minor (reminiscent of a giant stony fiddler crab when seen from the air) the building shields an open-air quadrangle. Simon refers to this quad as the ‘lung of the project’ — and by inference the complex organism that is the building itself. The purity of the quad was foremost in the team’s mind; to the point of resisting all temptations to over design it.

The building’s arm don’t quite touch, with gaps made at the corners, encouraging passage diagonally through the block. He recalls the challenges to keep the quad free of any unnecessary details — holding firm to a certain informality which is intended as an implicit nod to visitors; that they should ‘keep on the grass’, as he puts it. The team then set about narrowing the depth of floor plans within the building to improve access to natural light and air for those inside. The added advantage of this innovation was the space carved out for a colonnade to wrap the inner sides of the quad at ground floor — which is both useful and generous. The colonnade is a civic space, offering opportunity for the public to engage with the University, and for building users to take cover from inclement weather. The second move was to develop the building plans with a series of ‘thresholds’ between different functions. This blurring of lines between spaces reconciled a conflicting desire for openness and the need for privacy. These thresholds start with the quad; a transition between city and university. They continue into the building through a double-height lobby and successively to the end of each building arm — finishing in triple-aspect and terraced staff workspaces that oversee the quad entrance below and look out on over the south city to the Wicklow Mountains.

The GDA is the Sponsoring Agency, the National Development Finance Agency is the procuring body. Eriugena is owned by Macquarie Capital Group Ltd. It is supported by a construction joint venture of Sisk & Son (Holdings) Ltd and FCC Ireland Ltd and also by Sodexo Ireland Ltd. Project funding is from a number of sources, including the European Investment Bank.

We met with @GansonLtd this week to welcome @Education_Ire, D7 Educate Together and the design team to mark the topping out of the teaching block on the new school. Construction is on track for completion in spring next year. ggda.ie/construction-t… pic.twitter.com/af6VioMinh

@srpski_dubliner Hi Ljubisa, the school is currently on programme for completion in February 2023.

Fantastic to meet the D7 Educate Together Junior Infants in their class bubble today as they came to take a look at the construction of their new school. They had lots of questions! pic.twitter.com/BRgCgtZHU5

Happy new year from the GDA Team! We're excited about what's to come for the Grangegorman Project in 2022. Meanwhile, if you missed our winter newsletter, check it out here ggda.ie/latest-newslet… pic.twitter.com/f5IQ6v2ShY