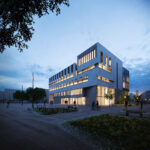 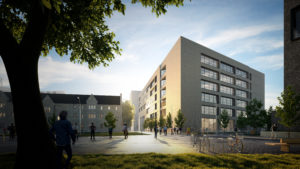 The Academic Hub and Library is primarily a single integrated campus library, 12,600 square metres in size, that will accommodate TU Dublin’s library collections for students based on the university’s Grangegorman campus.

When completed in 2024, the building will become home to a range of student and staff supports, including the Career Development Centre, Civic Engagement, Maths Learning Centre, Disability Support Service, and People Development.

This development, which incorporates the existing North House (a protected structure) into its design, will ensure TU Dublin’s library requirements are all met on a collocated physical footprint.

The proposed building is approximately 19,000sm and extends over 6 floors. It will house a range of different facilities including Academic Support Services, Institute Administration, a Public and Academic Library and will be the first co-located library in Ireland once completed.

First constructed between 1848 – 1854 to the designs of Murray & Denny, the original use of the North House was as the Male Wards of the Richmond Lunatic Asylum. It continued as part of the hospital when it became St Brendan’s Hospital before falling into disrepair around 1995 and was no longer used.

In the Grangegorman Masterplan, this building is referred to as the ‘Top House’. The building was adapted for reuse over 2014 ahead of the arrival of the first TU Dublin students in September of that year and the building was renamed as the North House.

In August 2022, Mack Signs began the installation of a 70m artwork on the Academic Hub hoarding. Designed by Fidelma Slattery, the illustration is part of the Grangegorman Histories project. This illustration responded to the vision and values of the Grangegorman Histories project. The artwork is part of the site’s Hoarding Strategy which aims to offer construction hoarding as a space for creative artwork during development. Based on reading the stories of the people who lived and worked on this site over the centuries and made by using details from the buildings you can see all around you on the campus it is designed to reflect the complex history of this place and the staff and patients who lived and worked here. 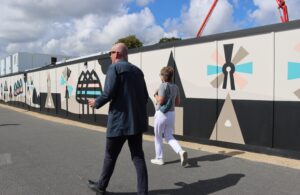 The Academic Hub Library Complex is due to be completed in May 2024.