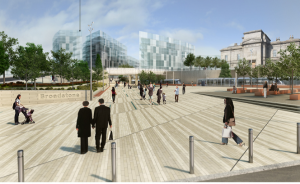 An idea of what the completed Broadstone Plaza will look like

The Broadstone Gate will provide a key access to the Grangegorman site once complete and is being developed as part of the Luas Cross City works. It will be finished as a public plaza and the access will provide a major linkage between Grangegorman and Dublin city. The plaza is situated off Constitution Hill on the site of the Old Royal Canal at the former Great Weatern Railway Station commonly known as Broadstone, and will mark a prominent entrance to the Grangegorman urban quarter.

The Broadstone site, which borders Grangegorman on its east side, was subject to a Part VIII planning process in 2014 in order to facilitate the site development and gate access.

Under the Grangegorman Masterplan, the primary urban path through Grangegorman – St Brendan’s Way will link with the Broadstone Gate which when completed will reach as far as Prussia Street. The link with Broadstone can also be seen as an extension to the 18th century historic spine of Dublin City which covered Dublin Castle across Grattan Bridge, along Capel Street/Bolton Street, Henrietta Street and King’s Inn.

In May 2016, the boundary wall dividing Broadstone and Grangegorman was removed, creating a historic pathway joining the two sites for the first time. The Broadstone Gate entrance will mark the first access to the Grangegorman site from Constitution Hill. The Luas Stop at Broadstone opened in late 2017. Works to the Plaza are ongoing and due to be completed by summer 2020.

Check out this video of what the Broadstone Gate and plaza may look like when opened and in use.

Scheduled for completion by summer 2020.

DMOD Architects with TII and GDA