GROWN HOME: A Digital Art Project for Grangegorman by Arbor. 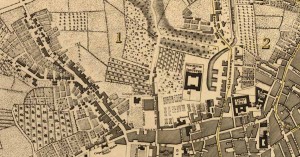 GROWN HOME is a public art project which aims to explore the historical and contemporary landscape of Grangegorman through a culinary lens.

Evolving from its original Viking settlement at Oxmanstown, in the 14th Century Grangegorman functioned as a “Home Farm” and orchard serving the Augustinian Priory at the site of what is now Christ Church Cathedral. It went on to become a bustling market before major economic decline resulted in the area becoming a site of state agency and the poor.

Grangegorman today has become a vibrant diverse community deeply connected to its food producing history. With a wealth of local food producers and innovators based in the area, Grangegorman has established itself as a centre for food excellence in Ireland.

Speaking about the project, curator and co-director of Arbor, Hilary Murray said “Having worked on several projects exploring the relationship between food, art, and place, myself and Clare Anne were eager to research an area such as Grangegorman. This historic place, with its rich and layered food heritage, provides us as artists the perfect opportunity to re-imagine an exciting culinary future for the Dublin 7 area.”

The GROWN HOME project will create a series of site-specific community culinary workshops. The outcomes of which will inform a GROWN HOME digital repository detailing historical and contemporary food practices in the area, as well as a series of culinary responses by Clare Anne O’Keefe.

The project will culminate in a digital art intervention in the form of an APP. This mobile platform, curated by Hilary Murray, will intersect with the GROWN HOME culinary repository and delve into the evolving, diverse and complex voices of the people that live and work in the Grangegorman area.

The Grown Home project has been commissioned as part of ‘… the lives we live’1 the Grangegorman public Art project. Further information on this and other aspects of the Grangegorman project can be found at www.ggda.ie

1 Extract from ‘Dreams of a Summer Night’, New Collected Poems (2011), by kind permission of the author, Derek Mahon, and The Gallery Press.