Only residents of the defined neighbourhood are eligible (see electoral area map below). 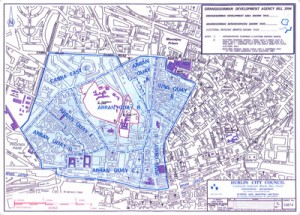 Following the election process arising from a casual vacancy held on 12th February, the following representative have been put forward for the Consultative Group.

In order for a person to be eligible for election to the GDA Board or Consultative Group they must fulfil all of the following;

a. Be resident in the GDA area (see map above)
b. Be on the register of electors in the area
c. Be nominated by at least 2 registered groups

Following the elections for community representatives to the Board and Consultative Group held on 30th August, the following representatives have been put forward for the new term.

In order to be able to vote in either election or to put forward candidates all groups must first register with the Grangegorman Development Agency.  The registration period has now passed and the lists for both elections have been compiled, one for the Board election and one for the Consultative Group election. Please see below.

A tenant/residents’ association can nominate and vote in both the Board and Consultative Group elections. In the 2018 call for groups, a total of 9 tenant/resident associations registered for this election process.

A Community Group includes tenant/resident associations, parish and district associations and groups, youth and sports clubs, and similar non-commercial groups in the Grangegorman neighbourhood (see map above). Registered Community Groups can vote in the Consultative Group election. In the 2018 call for groups, a total of 13 Community Groups registered for this election process.

The nominations for the GDA Board can be viewed here.

The nominations for the Consultative Group can be viewed here.

If you have any queries relating to this or any other matter please do not hesitate to contact us on 01 4024140 or e-mail us at communications@ggda.ie.

The Agency reserves the right to;

(ii)          take any other action which it believes is necessary to secure and protect the integrity of the electoral process.