A fragmented journey, across time and space over 500 years, through the architectural, psychological and socio-political changes in a confined space of Dublin’s north inner city. From the 16th and 17th century land grab creation of the Monck and Moore estates to the growth of Henrietta Street, Broadstone; to the new Grangegorman Campus, formerly St Brendan’s Hospital. Narrated by the imagined, irreverant voice of a dead artist friend, Tony Rudenko, voiced by Aidan Gillen. With charcoal drawings, animation and live action footage created and scripted by Trish McAdam, music by composer Roger Doyle and collaboration, on motion graphics, from Marc Sherwin, Psychotherapist, Dr Paul Caviston, and advisors Orla Barry (former CEO Mental Health Ireland), HSE Archives and staff from the GDA.

Confinement (2019) was launched at a private screening in The Benchers’ Room of the Kings’ Inns, Henrietta Street, on 21st February 2019 followed by a discussion on “socially acceptable norms” between Catriona Crowe, Trish McAdam and Dr. Paul Caviston, and introduced by Senior Counsel John Rogers. Later that month it was an official  selection in the Virgin Media Dublin International Film Festival, with two screenings taking place in the Lighthouse Cinema, Smithfield. In May Confinement was part of the May season of 10 Trish McAdam films in the Irish Film Institute with a discussion between Dean Kavanagh and Trish McAdam after the screening of Confinement.

This film idea emerged from a line my eyes traced on a map, which went from Henrietta Street to Grangegorman. I had lived in number 5 Henrietta Street 1977 – 1986, on and off, and had never noticed my proximity, as the crow flies, to the infamous Grangegorman Asylum, which, in my living memory, was used as a common social control and threat.

Not a documentary, more a fragmented bricolage of moments in time, impacts of social, political and technological changes in the uses of the land in a space that was green fields until the early 18th century and that time has filled in with buildings ßthat have housed extreme ideas of their time.

I use the imagined voice of Tony Rudenko, a bricolage artist who lived in Henrietta St until his death in 2014. Tony was a good friend, when I lived there, with a unique, irreverent voice which suits my subject well.

My research journey has included conversations with people associated with the key buildings on the line, Henrietta St. the King’s Inns, Broadstone Terminus and Grangegorman. These have led me to further research which revealed an intensity of change on this line over the 300 years and more,  the carving out of new land in the city among the merchants, bankers, lawmakers and lawbreakers, in the constantly evolving environment of changing mindsets, technology, philosophy and aesthetic, generation after generation of ever changing cultural and political influence.

It is hard to follow the line and not think of what the present is doing and what the future might bring it. 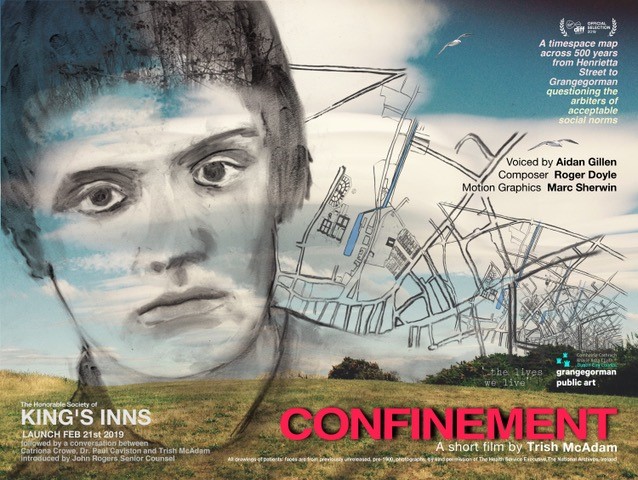